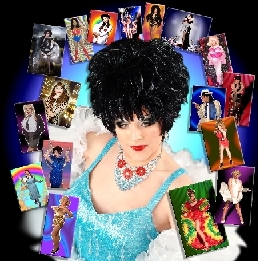 
If you're looking for a second rate cheap drag act, you've come to the wrong place. Now being recognised as one of Europe's finest drag entertainers, This Drag Experience is a class act with a fantastic reputation, not to be confused with trashy back street cabaret.
This Drag Queen is no stranger to a demanding audience, holding their attention with a mixture of hilarious comedy and charm and has performed all over the UK plus many parts of Europe & Asia.

She has also appeared on television with Ruby Wax, Alan Carr & Esther Rantzen. On stage with Grace Jones at the Brixton Academy, Performed at both Oxford and Cambridge universities and a face to be seen at many celebrity parties.

She comes into her own when She's out on the town with the girls, giving them an evening of outrageous comedy.

Offers live stand-up adult comedy & song , lots of cutting one liners and quick wit, There is also loads of audience
participation so don't think your safe because you are sitting at the back of the room,

Promises you a evening of Music, Laughter and unbelievable glamour,
This Showgirl performs her wonderful and shameless routine
with dazzling quick-fire costume changes and a whole host for of familiar Celebrity impersonations .

She as provided shows for many Military bases, entertained stars at Celebrity bashes
and produced her very own theatre staged production.
The show can be booked for any occasion at any time of the year,
she has performed all over the world making her
an intertational success and ideal for every occasion imaginable, including;
Television shows, Corporate functions,
Theatre shows, Ladies Evenings, Clubs and pubs, Bar mitzvahs,
Holiday centres, Hotels, Weddings, Variety shows,
Private functions, Birthday parties, Office parties,Company promotions,
Theme nights, Hen and Stag shows,International resorts, Charity galas.

She isn't just a Drag Queen , she's a one man comedy variety show.

Redefining the term Drag Artist, She has broken new ground in the world of performance art, from the moment she explodes onto the stage singing live her adopted signature tune "Shameless" she has the audiences undivided attention.
After delivering her outlandish stand-up adult comedy, She launches into a myriad of famous characters such as Tina turner, Madonna, Dolly parton, Britney Spears, Cher, Lady Ga Ga, Amy winehouse , Shirley Bassey,Liza Minnelli, Michael Jackson,
plus many other star impersonations which have been recreated with her enormous sense of humour , with a few unexpected surprises.

From her introduction to her amazing finale this is undoubtedly a show not to be missed .
Combining her abilities to design her own superlative costumes and blending in a montage of extravagant side-splitting humour with stunning glamour , she has produced a classical yet contemporary extravagana.

Rates
Subject to times and travel